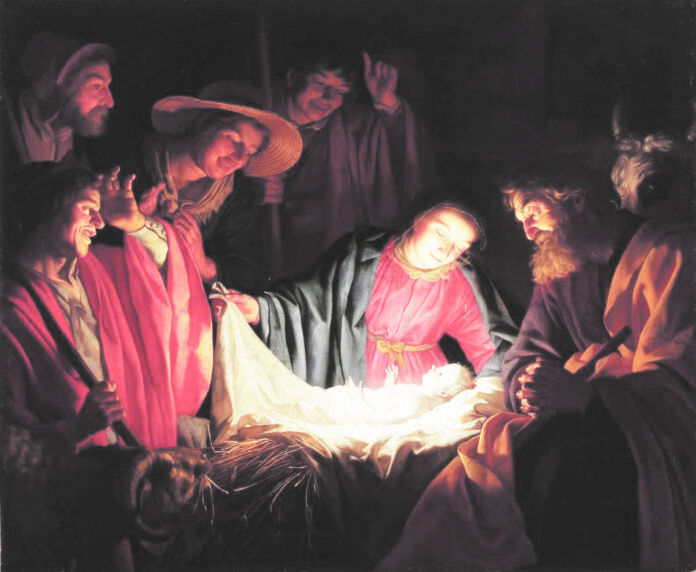 Aaron Earls (via baptistpress.com) – Christmas is a celebration of a real event, according to most Americans. Just don’t expect them to know exactly why Jesus was born and came to earth.

A new study from Lifeway Research finds close to 3 in 4 Americans believe Jesus was born in Bethlehem more than 2,000 years ago. Even more say Jesus is the Son of God the Father, but less than half believe Jesus existed prior to being born on that first Christmas.

“Most Americans consider Jesus’ birth a historical fact,” said Scott McConnell, executive director of Lifeway Research. “It can be easy to only evaluate Jesus like you would any other historical figure — thinking about when He lived and what He did. However, the Bible also describes Jesus in a way that one must evaluate who you believe He was. Most Americans believe His origin was from God the Father, but half as many believe he existed before His birth.”

More than 9 in 10 Americans (91%) celebrate Christmas, according to a previous Lifeway Research study released this year. For most of those celebrating, Christmas is about a historical occurrence. More than 7 in 10 (72%) say the Jesus Christians believe in was born in Bethlehem more than 2,000 years ago, including 49% who strongly agree. Few (9%) disagree, while 18% aren’t sure.

Most Americans (80%) agree Jesus Christ is the Son of God the Father, while 10% disagree and 10% aren’t sure. The average person isn’t quite as sure about the Son of God’s existence prior to Jesus’ birth. Around 2 in 5 (41%) say God’s Son existed before Jesus was born in Bethlehem. Close to 1 in 3 Americans (32%) disagree, and 28% say they’re not sure.

“The 2020 State of Theology Study showed that 72% of Americans believe there is one true God in three persons: God the Father, God the Son and God the Holy Spirit,” McConnell said. “Prophecies such as those in Isaiah 9 reflect that the Messiah would be the Wonderful Counselor, Mighty God, Everlasting Father and Prince of Peace. While these titles reflect the Trinity, some Americans do not connect the Jesus born in Bethlehem with the Messiah who already existed as God now coming in the flesh.”

The religiously unaffiliated are least likely to agree with any of the statements surrounding Jesus’ birth and identity, but some still believe despite their stated disconnect from organized religion. Almost half (48%) believe Jesus Christ is the Son of God the Father. A third (33%) say Jesus was really born in Bethlehem more than 2,000 years ago. Fewer (15%) believe the Son of God existed before Jesus was born.

Christians who attend church four times a month or more are most likely to believe each of the statements about Jesus and His birth: 98% believe He is the Son of God the Father, 95% say He was born in Bethlehem 2,000 years ago, and 63% agree the Son of God existed before Jesus was born.

Americans aren’t always sure what motivations Jesus ascribed to Himself and His coming to earth. When given seven options — four correct and three incorrect — for reasons the Bible records Jesus as saying why He came, only one choice garnered a small majority. Americans are more likely to choose a correct answer than the false ones.

Half (51%) say the Bible records Jesus as saying He came to give His life for many, which Jesus does say in the Gospel of Mark: “For even the Son of Man did not come to be served, but to serve, and to give his life as a ransom for many” (Mark 10:45, CSB).

Far fewer (9%) believe the Bible records Jesus saying He came to bring division rather than peace, despite His making that claim in Luke 12:51. Altogether, only 3% of Americans recognized all four options in the list that match biblical quotes from Jesus.

“Despite widespread belief that Jesus really came to earth as a baby, there is far less familiarity with why Jesus said He came,” McConnell said. “However, the majority of Americans believe Jesus came to give His life for many, which is reflected in the angel’s words to Joseph in Matthew 1, ‘She will give birth to a son, and you are to name him Jesus, because he will save his people from their sins.’”