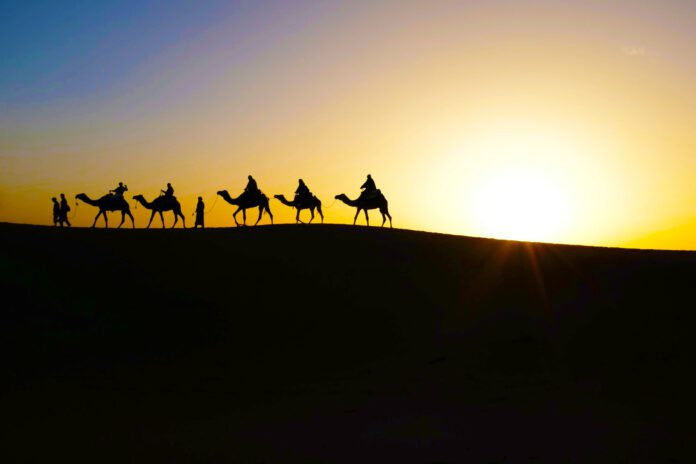 Jeff Swart – The Gospels do not specifically state how many Wise Men, or Magi, followed the star to Bethlehem to find the new “King of the Jews.”  The traditional manger scene has three wise men whose names, although not mentioned in Scripture, are said to be Caspar, Melchior and Balthasar according to tradition.  The number three was probably derived from the three gifts that were given the Christ child — gold, frankincense and myrrh.  There is a story told of the fourth wise man whose name was Artaban who took a sapphire, a ruby and an expensive pearl to give to the newborn King.

The story goes something like this: The four Wise Men started on their journey from Persia in the East to Bethlehem in Judea.  On the journey, Artaban is said to have stopped to care for a sick traveler.  The others continued on and Artaban was left behind.  He was thus forced to sell the sapphire to purchase camels and supplies to continue his journey.  When he arrived in Jerusalem, the other Wise Men had already left for Bethlehem and Herod’s soldiers were in the process of massacring the male children.  Artaban bribed a captain under Herod’s command with the ruby to spare the babies in a small village where he was staying.

The story continues with Artaban searching the country for the next 33 years until one day, as he was entering the city of Jerusalem, he saw the Christ about to be crucified.  He took the expensive pearl out of a sack to bribe the soldiers so as not to kill the King when a woman cried out to Artaban to save her from being sold as a slave in the market.  He immediately gave the last gem as a ransom to deliver her.  Now, he had no precious gem to give to the King.

Going back to the place where the King was to be crucified, Artaban wept before the King because he had nothing to give that would deliver Him from execution.  Jesus is said to have looked upon him and declared, “Don’t be brokenhearted, Artaban.  You have been helping Me all your life.  When I was hungry, you gave me food to eat. When I was thirsty, you gave Me drink. When I was naked, you clothed Me, and when I was a stranger, you took Me in.”  Commentators maintain that Artaban was the wisest of the Wise Men.

Although this fictional story is not historically accurate, I do believe it illustrates a Scriptural principle.  Jesus clearly taught that we serve God by serving our fellow man.  In the gospel of Matthew, we are told that the Lord will one day speak these words to many of His children: “The king will reply, ‘I tell you the truth, whatever you did for one of the least of these brothers of mine, you did for me’” (Matt. 25:40 NIV).

This Christmas season, I pray that we will all follow the example of the wisest of the Wise Men and “…in everything, do to others what you would have them do to you….” (Matt. 7:12).