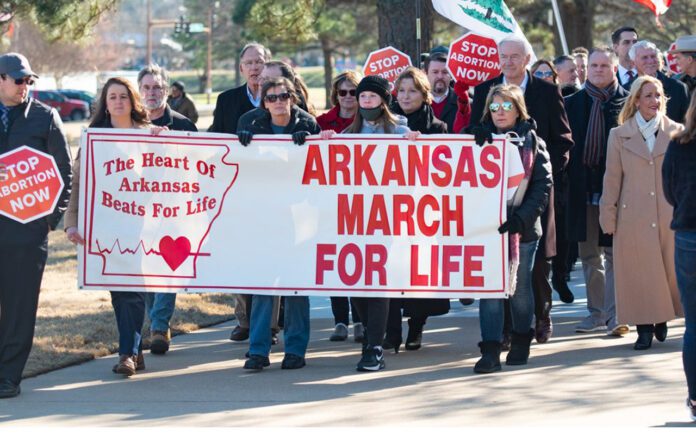 The 44th Annual March for Life, sponsored by Arkansas Right to Life, will be held at 2 p.m. Sunday, Jan. 16, in Little Rock. The march marks the 49th anniversary of the Jan. 22, 1973 Roe v. Wade Supreme Court decision that legalized abortion in the United States.

The observance is an event that attracts thousands of Arkansans from across the state, including churches and families to participate in a peaceful, prayerful and powerful remembrance of the millions of unborn children who have lost their lives to legal abortion.

“As we celebrate Arkansas being named the No. 1 pro-life state for two years in a row, we recognize that our work is not over as long as unborn babies are still killed from legal abortion in our state,” said Rose Mimms, executive director of Arkansas Right to Life. “We still face tremendous opposition as we work to protect the lives of the unborn.”

Andy Mayberry, president of Arkansas Right to Life, will serve as the master of ceremonies.

“This year our program will focus on fathers of aborted children, which will include personal testimonies from Jeff L. and Bruce T. It’s time that men who have lost children to abortion are recognized and provided a platform to share their stories and acknowledge their pain and grief,” said Mimms, adding that special materials for men will be available at the March for Life information table.

Arkansas Right to Life is the state affiliate of the National Right to Life Committee the oldest and largest pro-life organization. For more information visit https://artl.org/.

BT Staff
Share
Facebook
Twitter
Linkedin
Previous article
MOVING WITH THE MINISTERS: January 12, 2022
Next article
What It Means to Truly Be Broken
RELATED ARTICLES
All The News